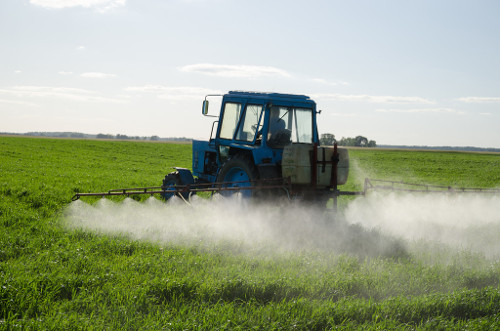 After the detailed guide on biological pest control in the previous chapter, it’s now time to present you anything you need to know about the chemical pest control methods used for pest extermination anywhere across the world.

They are not so sustainable as the organic ones but are often more effective and will be used in future even more extensively. You need to be familiar with the most popular chemical pesticides and their effect on production and the environment because it’s strictly related to your health.

Chemical pest control methods have been used for thousands of years by civilizations which had much less knowledge than the current population. Sumerians found out that sulfur gives great results in insect extermination.

However, the actual revolution in chemical pesticides happened during the 18th and 19th century when the industrial revolution required much more efficient pest treatments in terms of scale, effectiveness and speed.

To present days, chemical pest control methods are among the major types of vermin extermination practices and despite the fact that pesticides often lead to serious health issues, chemical compounds are vastly produced and sold across the whole world.

Here are the major types of chemical pesticides that are used nowadays in agriculture, domestic and commercial properties for pest control of various insects and rodents:

Fungicides are chemical compounds or organic organisms with biocidal properties, which help for the destruction of fungi and fungal spores. Fungi may cause severe disruption of any agricultural process.

This leads to losses of yield and lowers the final quality of the production. Apart from using fungicides in agriculture, they give very good results when used to cure fungal infections inside animals.

The major active ingredient of almost any fungicide is sulfur, which may turn out to be 0.5% of what is contained inside some of the heavier fungicides.

Here is the full list of fungicides used in agriculture. Refer to it whenever you need additional information

Fungi can be controlled effectively without the use of chemicals. It’s much more sustainable and causes no damage to the soil or pollution of any kind. Some plants do great job in the fight with fungi because of their naturally evolved defensive system.

Processing plants into sprays, mixtures and compounds of any other kind, turns out to be a great way to make natural fungicide. You can use any of the following extracts for the preparation of natural fungicides:

If you’re interested into making a fungicide yourself and buying any from the store sounds like a bad idea, don’t hesitate to take a look at this detailed on how to make DIY fungicide for plants.

Insecticides are any chemical substances that are used for insect extermination. They successfully help to eliminate insects and any life stage, including ovicides, larvicides, eggs and larvae.

Particular types of insecticides are used for exact purposes in a field like agriculture and medicine. One of the main reasons for the increased productivity of agriculture in the last century is the development of better and more affordable insecticides.

On the other hand, insecticides are able to cause damage to the ecosystem and health, that’s why recent studies and efforts are made towards increased implementation of organic pest control methods.

There two major classifications of insecticides:

Another classification of the insecticides may be made based on their repellant qualities, this categorizes them in:

Repellent insecticides are more suitable when a pest is targeted for extermination. This way it will bring much of the insecticide to the colony and will wipe it out.

Repellents are used in agriculture when people want only to keep the pest away from plants. When extermination is not planned, repellents give great efficiency. The drawback is that repellents should be applied more often, especially if water has been applied over the plants after a rain for instance.

Repellents have much quicker effect in terms of crops preservation but don’t deal with the source of the infestation, while non-repellent insecticides kill the insect but such compounds are often more toxic and contaminate both – the soil and the crops often beyond the suggested requirements.

In case the nematicides are naular, you can enhance their effect by manually inserting them deeper in the soil. A rainfall would also help but if the insecticide has been sprayed as a liquid.

Non-fumigant nematicides have low volatility and diffuse through the soil (generally for short distances only) dissolved in the soil solution. Their movement may be enhanced by water movement through irrigation or rainfall. If in granular formulations, their distribution may be enhanced by physical incorporation into the soil.

Side Effects of Nematicides

Rodenticides are chemical pesticides, designed specifically for the extermination of rodents such as rats and mice.

Most rodenticides are lethal and do not serve only as repellents. They are produced and applied in the form of food which the rodents consume. It may take several hours to a few days for a rodent to be killed after consuming a rodenticide.

However, rodents often sense the threat and observe the rodenticide for a long time before consuming it. This is known as poison shyness and to reduce this, scientists now develop rodenticides with a very strong residual effect.

Instead of killing the rodent instantly, it causes dehydration and haemorrhage which cannot be stopped. This helps for avoiding problems related to rodents dying inside tiny crevices.

Are rodenticides dangerous to my pet?

Generally, rodenticides are considered to be a threat if consumed by other animals but that is a serious concern only if huge amounts of the chemical pesticide is consumed.

Secondary poisoning may occur if a rodent that has died from poisoning is consumed by a pet such as a cat. This only happens when an anticoagulant rodent bait has been used for the rodent infestation.

Such anticoagulants have a residual effect and the poison is stored inside the livers of mice and rats. When a predator eats the dead rodent, the poison from the liver gets spread inside the system of the other animal and second poisoning is observed.

However, this should not be a concern since modern rodenticides require multiple cases of consumption until they have a deadly effect. This is why you should always place more rodent poison whenever you see that the initially applied has been consumed.

Anticoagulants
As mentioned above, an anticoagulant is the type of rodenticides that may cause injury or death to another animal after a secondary poisoning.

When consumed by rodents, anticoagulant requires one or two weeks to exterminate the rodent. The number of ingestions required depends on the generation of the anticoagulant insecticide. If they are from the first generation, multiple doses are required. In case they are a 2nd gen even a single-dose is enough to put an end to almost any rodent with a moderate size.

Anticoagulants cause death to rodents because they block the vitamin K cycle which causes a malfunction in the blood-clotting process.

If other types of rodenticides have been used before without good success, it’s recommended to switch into a metal phosphide rodenticide. This is required because rats and mice give offspring too frequently and adapt to a pesticide within a short period of time, after which it has no effect on them.

A concentrate of about 0.75% to 2.0% is usually is added in rodenticides of this type. Such poison baits are distinct because of their strong garlic flavour. The odour is in fact very attractive to rodents but repels other animals which makes it very versatile as other animal species will leave it aside instead of eating it, which may disrupt the rodent extermination process.

Secondary poisoning, when metal phosphides are used, is not an issue. The risk is very low to zero because phosphides cannot accumulate in the liver of an animal similar to anticoagulants.
Hypercalcemia-causing Pesticides
Those are chemicals such as Calciferols, cholecalciferol and ergocalciferol. For people, these are healthy vitamins but to the rodent, they affect negatively the homeostasis in the body. When the rodent eat enough poisonous baits which cause hypercalcemia, the calcium levels increase so much that it starts to dissolve in the blood plasma.

The organs of the rodent that get most damaged are kidneys, stomach and lungs – the literally harden and become calcified.

Such rodenticides may not be deadly for your pet after an accidental consumption but its health may be affected. Always place poisonous baits in crevices where animals different from the targeted pest for extermination won’t be able to gain access.
Additional Less familiar Rodenticides

Chemical pest control is used across the whole world although it’s a double-edged blade. It provides decent efficiency in most cases but at high costs in terms of ecological impact. However, in many cases, it appears to be the only reasonable solution. For this reason, you should take a look at the two different point of views – chemical pest control with its advantages and why it’s not such a good practice for pest extermination.

Impact of Chemical Pesticides on the Environment

The insecticides are soaked into coarse particles such as ground corn or nut shells. This way the toxic chemicals come out slowly and have a residual effect. The environment is polluted not at once but instead much slower.

Such type of insecticides is used against soil-dwelling insects for more effective results and penetration into the soil.

Inert particles such as ash, chalk and talk are used for making a pesticide in dust form. Their most comprehensive application is to disperse them directly onto the surface. Such a particle is usually so small and thin that they immediately stick to the body parts of insects.

This makes it easier for the active chemical ingredient to start taking effect right after the moment of application. Dust chemical pesticides are very unsuitable for application in the open as they are very easily spread by the wind and get into the human body through the respiratory system.

Those are chemical pesticides which are distributed in a powder-like form and require to mix them with water. Such foliar insecticides are described as wettable powders due to the ease of their transportation.

Chemical pesticides based on emulsifiable concentrates do not have a residual effect on fruits and vegetable. They are mostly used in the form of sprays to treat pests in urban and industrial areas.

In standard emulsifiable pesticides, the emulsifier is usually dissolved in an organic solvent and the chemical concentration is watered with higher amounts of water.

Those are insecticides that have been produced and packed inside a spray can and have a solvent inside, added by the manufacturer. Such pesticides have a very long expiration date and are in most cases ready-to-use immediately after purchase.

Some aerosols are designed specifically for fogging machines that are used by pest control experts for fumigation services indoors and outdoors.

Protect Your Garden – Get Rid of Woodlice

Everything To Know About Green Pest Control