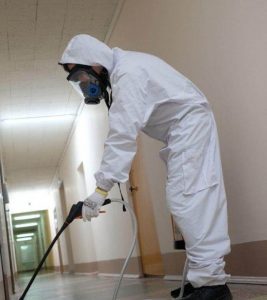 Pests can not only affect your health but also damage your property. Panther Pest Control offers flexible pest control solutions that will protect your home from vermin now and in the future. We are able to rid your living or working area of pests year-round, ensuring the essential hygienic and healthful environment for your family or employees. Our professional pest exterminators are equipped with a range of pest control tools and use advanced technologies to eradicate different harmful organisms and prevent their future invasion. They can handle various types of vermin, including bed bugs, cockroaches, mosquitos, rodents, termites, wasps, and more.

Enjoy Great Benefits from Our Pest Removal Service in Putney

Our Pest Control Service in Detail

Before starting whatever job, we will come to carry out a full property inspection and identify the root of your problem. After finding the spot of the vermin and determining the level of infestation of the affected places, we will suggest you the right pest eradication treatment for your particular situation. You will also be given a proper quote by us. If you’re delighted with our offer, we will make a pest control plan suited to your specific needs. After applying the best treatment for you, we will thoroughly clean your area, and if it is required, we will come again to make sure the pest issue is completely removed.

We offer pest control also in:

From all moth species, only a few are known to cause allergies. It’s their larvae – the caterpillar that might cause health issues mostly to the skin of a person. Some moth and butterfly larvae have hair or sharp spines that may penetrate the human skin and inject a toxin which is, in most cases harmless but may cause allergic reactions to some individuals such as:

It’s caused primarily by moth caterpillars and is identified by symptoms such as:

This reaction from contact with moth larvae might be caused only by moth caterpillars that live in South America. Such symptoms are a result of a sting which injects venom that might lead to even more troublesome symptoms like:

The venom spreads into the whole body pretty quickly and other organs like kidneys and lungs get affected pretty quickly. In this case, an anti-venom should be given to the sick person immediately.

Matteo Grader is the bed bugs expert. He is responsible for domestic pest control sessions in London, and exclusively specialises in bed bugs treatment services. He has several years of experience in dealing with bed bug infestations and other pest issues.

Matteo also helps train new exterminators. He will advise you on the most effective pest prevention and proofing methods so that your home stays vermin-free in the future.

Alexander Clarke is one of the first exterminators in London and ever since he began his career, he’s proved to be reliable, skilled and effective. He is an expert in dealing with wasps and wasp nests, as well as other unwanted insects.

He has vast knowledge about various types of household pests, their life cycles and habits, and is masterful in applying professional anti-insect treatments and methods. He covers the entire area of London and delivers quick and efficient results. You can listen to his advice and secure your home from future pest problems. He will make sure your home is treated thoroughly.

To help you in the fight with rats and mice, Noah Walker is perfectly trained and qualified in employing industry-approved rodent control methods, including setting up traps, the use of rodenticides, sealing points of entry, etc. He has been working as an exterminator with Panther Pest Control for over 3 years and is unequalled in finding the rodents’ nests, entry points and routes.

He is the leader of a couple of rodent control teams and helps train new technicians.

We’ve made sure to answer most of the questions we get asked about the services that we offer. You can find the answers to your questions here.

Pest Control Specialists Are in Your Area

Vermin do not have boundaries. They do not have favourite cities. They are everywhere. We operate in London and are ready to help with your pest problem every day of the week or the weekend. Don’t hesitate to call for an emergency pest problem. Teams of pest exterminators are in the M25 area and will come to the rescue as soon as possible.

Pest control specialists you can trust

Panther Pest Control always makes sure that the job is done up to the highest standard. If you are in need of a short-notice or an emergency pest control treatment, call us on 020 3404 5177 without delay or fill in our contact form at any time. We’ll get back to you with a free quote ASAP!