Woodlice may look like insects, but in fact, they are fourteen-legged crustaceans related to lobsters. Unlike their relatives, however, they have adapted to living on land. Still, woodlice need a damp conditions to be able to survive. It’s thought there are about 3,500 species of woodlice in the world and about 35-40 of these can be found solely on the British Isles. Some species such as the common sea slater are only found on the coast. Woodlice are a common pest nuisance in humid climates and damp conditions, mostly in gardens and wooden structures.

It’s pretty easy to identify a woodlice problem, as they have very specific characteristics. The problem is catching a glimpse of them, as they are active mainly at night. A woodlouse has an outer shell called an exoskeleton, which it must shed as it grows. The moult happens in two stages, unlike that of most arthropods which are shed all at once. The first back half of the shell is shed and a day or so later the front half falls off. Woodlice also have a pair of antennae to help them find their way around and two small ‘tubes’, called uropods on the back of their bodies which help them to navigate. Also, some species use these tubes to produce chemicals which discourage predators.

Although the woodlice diet usually consists of fallen leaves, sticks and other plant debris, in large woodlice populations attack to these plants may be exhibited:

What Can You Do to Minimize the Chances of Woodlice Infestation?

Generally, woodlice are considered beneficial in gardens as they produce compost and overturn the soil, but in large numbers (or infestation) and lack of food sources they are known to turn to cultivated plants, such as ripening strawberries and seedlings. On some occasions, woodlice may be spotted infesting homes in search of moisture, in which case their presence can indicate dampness problems that need to be addressed as soon as possible. Either way, pill bugs are not regarded as a serious household nuisance as they do not spread disease or damage wood. Nonetheless, woodlice can be a nuisance especially to gardeners and home-owners and happily there is a way to minimize the chances of pest infestation:

We hope that this information will help you keep your garden pest-free and your plants beautiful as ever. If you have any further questions or need help with your pest problem, don’t hesitate to ask us for advice or assistance.

If any of the ideas suggested above prove to be inefficient, don’t hesitate to seek professional help from Panther Pest Control. Call us at any time and get rid of the woodlice in your garden once and for all. 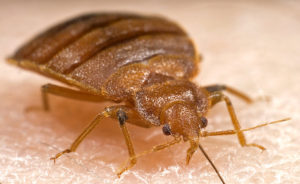 How Common are Bed Bugs in the UK Today?